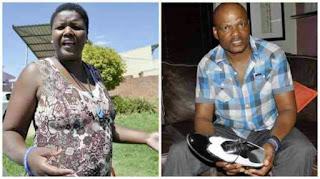 A South African pastor, Zendile Andries November, recently healed a female congregants, Kedibone Buffel, who had pimples on her private part with his shoe.

Buffel whose private part pimples was healed with her pastor's shoe told those who laughed at her that she doesn’t care what anybody thinks because she has been cured.She said:"I had pimples on my punani and for weeks I couldn’t have s*x with my husband. I was worried I would lose my husband of two years.""The pastor asked for his shoe to be removed and asked me to put it on my punani.

What matters is that I’m cured and my husband is a very happy man. I won’t mind being the pastor’s personal shoe polisher.
The Bible says even handkerchiefs and aprons that had touched Him were taken to thesick and their illnesses were cured."