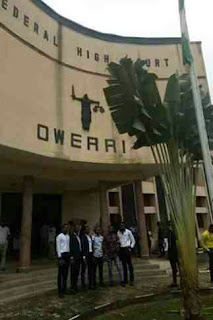 It's approximately 5 months since the Peaceful Riot Occurred in the Federal University of Technology Owerri.

In the Month of April, the Senate in her 421st sitting reached a conclusion to expel the Six (6) suspected FUTO students suspected to have led the hazardous riot.
But since then, the expelled FUTO students has not given up in their fight for Justice and also a fair hearing.

On 6th day of July, 2017, the Six expelled students had their first court hearing versus the Management of the Federal University of Technology Owerri at the Federal High Court Owerri, Port Harcourt Road.

The FUTO Six was represented by Barr. C. Nelson and Barr. C. Wisdom while the Management of Federal University of Technology Owerri was honourably represented by Mr. C. Njoku.

The Court hearing of the FUTO Six and FUTO Management was administered by Justice Lewis Allogar.
After the court hearing session, the Judge Adjourned the Case to 13th of September, 2017 due to the reason that all Court of Justice in the country will be going on a Summer Break.
Further adding that the Attorney who represented the FUTO Six will file an application to the Federal University of Technology Owerri to enable them seat for the 2016/2017 Rain Semester Examination as though they have missed the Harmattan Semester Examination.


There is little or no possibility that Judgment will be given on the case of the FUTO Six come September 13th, let's just keep our fingers crossed and hope for the best.