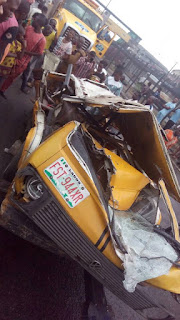 Lives were lost in the early hours of Saturday after a truck fell on a bus in the Ojota area of Lagos. It was learnt that the occupants of the bus were church goers returning from a monthly vigil.

The incident happened around 4am.No fewer than five died persons in an accident on Saturday morning at Ojota area of Lagos.

The accident occurred when a truck carrying two 20ft containers fell on a commercial bus(danfo) with Reg. No. FST 944 XR, and crushed five persons to death on the spot.

Mr Adesina Jamiu, the General Manager, Lagos State Emergency Management Agency, who confirmed the accident, said that three other passengers were rescued.“The incident happened at about 4.45a.m. We got the information about eight minutes later we immediately moved down. We activated all primary rescue respondents,“We brought out one female and two males alive. Unfortunately, five others, a boy of about 10 years, a woman and three men were brought out dead after using crane to lift the containers.“The dead bodies were taken to Ikorodu General Hospital, while those alive were taken to Lagos State Emergency unit at old Toll Gate Alausa. 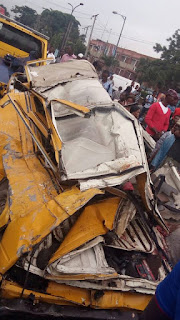 “The truck with Reg. No. AKD 663 XF and the bus will be taken to LASTMA yard at Oshodi,” he said.Jamiu, however, blamed the accident on overloading and bad conditions of the truck, stressing that the two 20ftcontainers were too heavy for the old truck to carry.The Commissioner of Police, Mr Fatai Owoseni, while confirming the incidents, said that investigation had already begun, adding that the police was on the trail of the truck driver.

It took the personnel from the police,LASEMA, FRSC and Rapid Response Service about five hours to remove the truck and containers from the road. (NAN) 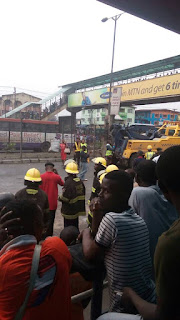