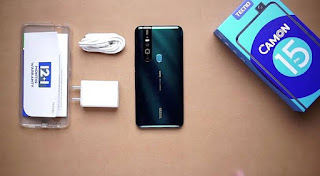 The pandemic came with over dependence of business and individuals on mobile devices. It also encourages appreciation of phone features like camera, processing power and battery capacity. Tecno Camon 15 smartphone was launched on 20th February 2020. As of 7th October 2020, Tecno Camon 15 price in Nigeria was between #59,000 - #69,000

Here are some of the specs of the phone:

16 MP, punched in the screen

Yes, at the back

From these specs, the following deductions were made.

The sturdy build, glass screen, plastic frame and plastic back cover that compliments its jade color gives Camon 15 a classy look that is very attractive.

The screen size of 6.6″ LCD Display makes games and movies look relatively good, thanks to the 720 x 1600 resolution.

The Tecno Camon 15 is a dual-SIM smartphone that accepts Nano-SIM and Nano-SIM cards.

Camon 15 runs HiOS based on Android 10 and packs 64GB of inbuilt storage that can be expanded via micro SD card (up to 256GB) with a dedicated slot.

Sometimes the details of pictures taken with Camon 15 tend to look over-sharpened.

There is no USB Type C in this version.

IS IT WORTH IT?

Camon 15 is a stress-free recommendation because it secures most of the potentials sort after by buyers. The cameras are very good and the battery lasts almost endlessly. The Software while annoyingly filled with ads and apps that you will find unnecessary, is equipped with a ton of features that are actually useful.