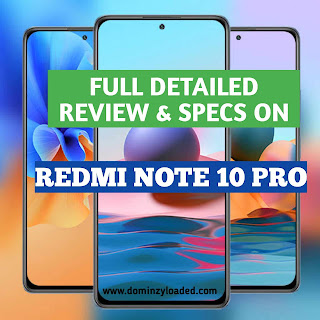 I'd be dropping my honest opinion about it and hopefully try to provide clarity and answer the question on everyone's lips- Is the phone actually worth the hype? Is Redmi Note 10 pro worth buying?
My review would be divided manly into the following categories viz:
I will further explore the various cons and pros of the device and finally give my verdict on the phone . So let's dive in.

I'm sure a lot of you will agree with me that the design of the Redmi note 10 Pro is outstanding and awesome. A t first glance, the appearance of the phone is eye catching, especially the variant slapped with the Glacier Blue finish on top. For clarity sake, the back panel is made up of glass and the frame around the phone is plastic.

This is one aspect that changed the game for the Redmi note series as it is the first time these lines of phones come with an OLED panel. It is a true 1080p panel and is capable of displaying vivid, punchy and crispy colours. Lol, do not expect a Samsung 1080p equivalent. Talking about Samsung displays, I currently use an S10+ with a 1440p screen resolution and over 500 ppi, so I did pitch both phones against themselves a little, although I'd say it's not a fair comparison, but here goes.
I reduced my Samsung resolution to 1080p just to do this and I can conveniently say the Redmi held up good. In terms of brightness, it's pretty much bright (especially when set to "cool"). The whites are really white and with it, I see more clearly under the sun than my S10+. I also noticed the screen was too whitish in a weird way. However the display can be adjusted to suit whatever preferences you might have.
In summary, it is no league with any LCD panel on the older Note Series and the 120hz refresh rate takes the advantage a notch higher with it's buttery smooth scrolling and responsiveness.

Using a separate/dual speakers for audio production, Xiaomi actually flung their weight around this one and showed what they could perform. The speakers are pretty loud and well balanced with a reasonable amount of bass. Compared to the stereo setup on my S10+, the speakers on the Redmi have a more quieter sound production which I believe is as a result of the Dedicated dual speakers unlike the Samsung which uses the earpiece to double as the second speaker. Apart from that, both have the same loudness quality. Lol, I've seen people saying the Redmi note 9 series have good sound outputs too. Yeah sure, but the Note 10 Pro is way ahead and better. The RN8 comes close to the sound production save for the fact that it's not as loud as the RN10P.
ALSO READ: See The List of Xiaomi Devices That Are Eligible For MIUI 13

On my first discharge cycle, with my refresh rate at 60hz, I used 7hrs on screen time with my battery falling to 32% before charging.
I charged to 100% and played Pes 2021 with it throughout. The battery ran from 16:09 to 21:18 which translates to 5 hours of gaming. All these were with maximum brightness, NFC and Mobile Data toggled ON, the phone at the highest level of volume and the screen at 120hz.
As to the charging. I charged phone from 0 to 100% while switched off and the following were the respective percentage charged alongside the time frame of charging.
59% in 30 minutes
70% in 47 minutes
95% in 1hr 17 minutes and finally;
100% in 1hr 26 minutes

Equipped with the SD 732G, paired with a 6gb of RAM, the RN10P is expected to deliver swift and optimal performance and it lives up to this expectation. Apps open flawlessly and quick enough with no lags.
As for the software aspect, MIUI as usual doesn't do justice to the RAM owing to its usual poor RAM optimisation. At one point, with my PES 2021 open, alongside 3 other apps. I noticed the RAM was 2.8gb of 6gb used. This shouldn't be a big deal though as none of the opened apps refreshed when opened after a long time.

The most controversial feature. I kept this for last because I believe it has been a source of constant differential opinions.
While some may argue that the camera ain't impressive for a 108MP shooter, others outrightly disagree.
Well to be honest, the both factions are right but there's an explanation to it. The RN10P does not do well with indoor shots or in areas with low or improper lightning conditions. Pictures taken in these scenarios are really below par and the colours seem to be a little washed off. I made this comparison with my S10+ 12mp rear camera.
As a sharp contrast, the Redmi Note 10 Pro outshines in outdoor photos. With proper lightning conditions such as the Sun, the note 10 Pro makes up for its shortcomings in low light shots by offering excellent shots with vivid and punchy colours although I felt there are a little bit saturated but not something the colour scheme settings on the phone cannot fix.
I'm not a camera inclined person so I won't explore the whole available feature the camera has to offer. I recently just found out that there was a 108mp dedicated camera mode.
The selfie camera is same way too, not impressive indoors and exceptional outdoors.
Hopefully our photography pros in the house can find a Gcam with good indoor settings for us.
Okay, so unto things I would like to consider as my own cons, for which I admit it might not be convenientional.

3.5MM JACK PLACEMENT: Over time, I've become accustomed to the bottom placement of the 3.5mm Jack, so imagine how weird it felt using a head phone with connection wires popping from the top of the phone after over 3 years. Maybe the wireless earbuds might solve this for me. At least it's better the jack wasn't left out.
HEATING: The caption might not really do this justice if I do not explain properly. I noticed slightly warming up around the camera area and directly on top of the camera lens during usage. This becomes more apparent and a tad bit heightened during gaming and charging (there was one time during charging I didn't notice this).
Now I am not saying it is bad else the caption would had read " Heating Problems". I believe every phone does get pretty warm during heavy usage. But then again, I have used a Note 9s and it would have been impossible to miss this. The heating does reduce gradually on longer heavy usages but does not go off entirely which I presume it's normal.
FINGERPRINT PLACEMENT: Call me crazy 🤪, but I do prefer an under display fingerprint. This is because it would had been a complementary feature to the Amoled display and the possibility of accidental touches, although which can be solved using the "press" rather than the "touch" option of fingerprint unlocking.
SCREEN QUALITY: I know I did give the screen a pass, but I would had loved to see how a Super Amoled would had fared on the 10 Pro. I mean Xiaomi used it on the Vanilla Note 10. Maybe all in an effort geared at cutting overhead costs, they opted for an Amoled panel as opposed to the Super Amoled on the Note 10.

The MIUI is not really too fancy for me as I've gotten used to One UI. For some reasons, which I don't know, the fonts I applied do not affect the notification bar and status bar. Maybe it's an OS compatibility issue but it's a guess though.
To me, the Always on Display is kind of a charade and I don't think it deserves the title "Always on Display" as ascribed since it only comes and stays on for 10 seconds. Hopefully, an OTA update can fix this.
I noticed I can't use full screen gestures mode with a 3rd Party launcher. Tried checking for the solution online and discovered it's a general problem of Xiaomi phones running MIUI 12.
One last thing of note I would like to add here is the Flashlight. I do not like the very low flashlight Xiaomi phones offer. Apart from the use of flashlight to take photos in dark areas, it can also serve as a torch. I hope they come to fix this because other competitors offer brighter flashlights.

Does Redmi Note 10 pro have issues?
My pros are the battery performance, a 10 hours SoT on average is a deal breaker for me and the faster charging capability is a Plus too.
Again the performance of the cameras in properly lighted up conditions and outdoor environments is great for me.
The large display and the stereo speakers is dope. Especially for me that sometimes play music through a phone's speakers.
VERDICT: It is a midrange device and for the price range, it did offer a good deal. The screen alone is a killer to the note 9 series and a proper improvement, although many would disagree. At this price point, I feel the Redmi note 9 pro was and is a rip off.
I wouldn't practically recommend it over the Samsung's A52 (which has always been a close head on competition), but for the extra screen estate and refresh rates, the IR blaster (that comes in handy) and the slightly better battery, it'll make a good impression considering the price points of both, although the A52 did get an IP68 water/dust resistance which makes it worthy of the extra couple bucks attached.
So for a long term user, the Redmi Note 10 Pro would serve you well. It's a true combo of both the Midrange and entry level devices.
As a side tip, the screen guard of the Samsung's A71 fits it perfectly, for those who might be having difficulties getting one from their various locations owing to the lesser availability of Xiaomi accessories in particular locations.
Source: Joel Okokobi
These are the Specifications of Redmi Note 10 Pro in details:
Colours:
Nebula Purple, Aurora Green, Glacier Blue, Gradient Bronze, Onyx Gray

6GB+64GB | 6GB+128GB | 8GB+128GB
LPDDR4X RAM + UFS 2.2
* The amount of available storage and RAM is less than the indicated memory, as the operating system and pre-installed software are stored in the device.

Supports HDR display when playing HDR10 video content
Sensors
Proximity sensor | Ambient light sensor | Accelerometer | Electronic compass | Gyroscope | Linear vibration motor | IR Blaster
Splash,Water and Dust Resistant
IP53
*The device has been tested in a controlled environment and certified to be resistant to splash, water, and dust in specific laboratory conditions with the classification IP53 under IEC standard 60529. Resistance is not permanent and may deteriorate naturally over time. If your device is wet, do not attempt to charge it. Liquid damage is not covered under warranty.
The test is conducted by TÜV SÜD Certification and Testing (China) Co., Ltd. Shenzhen Branch.