12-year-old boy Finds A Woman Hanging From A Tree 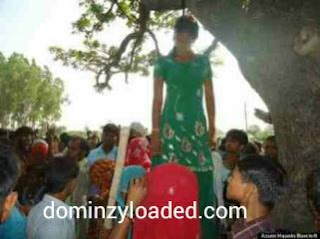 A night at the funfair turned to horror for a 12-year-old boy who discovered a woman's body "hanging from a tree" on his way home.
Charlie Hollands, 12, screamed for help when he saw the body dangling from the tree at about 9.30pm on Friday night in Guildford, Surrey.One of Charlie's friends called the police, who cordoned off the stretch of road near the Spectrum leisure complex so other youngsters wouldn't see the grisly sight.
Mum Layla Hollands, 38, said Charlie was walking down Parkway with some friends and their older brothers, who had all gone to the funfair, when he looked to the right and saw the body,Get Surrey reports.He called her shortly after 9.30pm "sounding a bit shocked" and told her, "there was a body hanging from the tree"."Charlie shouted at his friends. The older boys pulled him away and went and looked. Someone phoned the police.""He [Charlie] does seem fine,"Mrs Hawker added."I said 'do you want me to come and get you?', but he said 'no, I want to go to my friend's house.'"So he's staying at his friend's house, they've said he's fine and alright."Mrs Hollands, a mother-of-four, said Charlie was with a group of about 12 friends, the eldest of whom was 19.
Surrey Police said officers were called to the scene at around 9.20pm."Ambulance crews were also in attendance but the woman was sadly pronounced dead at the scene shortly afterwards."The area was cordoned off and road closures were put in place while emergency services dealt with the incident."An investigation into the death, which is being treated as unexplained, remains on-going but it is not believed there is any third party involvement or any suspicious circumstances at this.
The police cordon was lifted from the scene shortly after 10.30pm.Tributes were paid on social media to the woman, who has not been named.
Sarah Ball wrote on Facebook: "I hope the young girl in question has now found peace, our will to live is very strong and it takes an awful lot to take one's own life."My thoughts are with all those who came across the young girl, talk it out, it's a great healer, and if needed counseling is good for healing the soul."Surrey Police should be able to help those traumatised by this terribly sad event."Hannah Parratt said: "Very very sad and upsetting that she, and others, can't see any other way out of their distress and depression than suicide, my thoughts and prayers are with her family and people who witnessed this tragic incident."Sarah Middleton offered"thoughts and prayers" to the woman's family."May she rest in peace now from the troubles that were troubling her," she said."It's okay to talk people so please if your feeling low talk to someone - mental health is not a joke, so get help before it's too late."