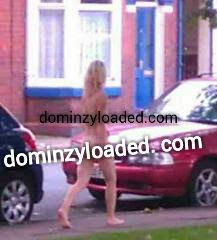 A naked woman has left residents baffled after being pictured casually strolling through a town centre in broad daylight.
Themystery blonde was snapped by a stunned passer-by as she wandered just yards from two churches in Doncaster, South Yorks.Sporting shoulder length hair and what appeared to be a tattoo on her right arm, the woman appeared to be carefree and oblivious to her surrounding as she walked barefoot past parked cars.The snapper then posted the picture on Facebook with the caption "Beautiful day for a stroll down Chequer .
the photo appears to have been taken near the Beechfield Garage - which is just a short stroll from Doncaster Police station, Doncaster Baptist Church and the town's Museum and Art Gallery.One Facebook commenter wrote: "Only in Doncaster lol."It is not clear exactly when the picture was taken but the lighting in the photo suggests it was during the day.The incident comes just a few months after a naked couple were filmed having sex in broad daylight in Doncaster - just yards from students at Doncaster College.The clip, filmed in May, showed a dark haired man and a blonde haired woman romping totally naked on a patch of grass - and were filmed by an amazed onlooker who captured the sordid scenes on his mobile phone from behind a fence.
The baptist church on Chequer Road, Doncaster last September, South Yorkshire Police announced it was stepping up efforts to prosecute people committing acts of public indecency in Doncaster.The warning came after figures revealed Doncaster police had received a total of 48 complaints of public indecency since 2010.