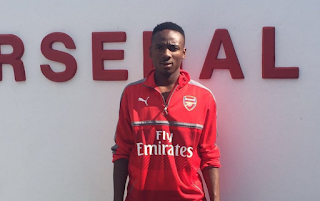 Nigeria U20 captain Kelechi Nwakali has donated the sum of N73million to the football academy he played for before signing for Arsenal.

The 20-year old gifted the ASJ Academy based in Eziobodo, Owerri the sum of $240,000, which amounts to N73.2million at the official exchange rate of N305.

“It was a rare gesture from him and the entire academy were appreciative of his generosity and humility”.

Nwakali has recently signed a one-year loan deal with Dutch club VVV Venlo, where he will spend the current season from English giants, Arsenal.

He spent the last season on loan at another Dutch club, MVV Maastricht, but played in the second tier of Dutch league football.

But he will now play in the top league with Venlo, who have also previously had Tijani Babangida and Ahmed Musa on their payroll.