Rhianna Regrets Giving Up Her Virginity 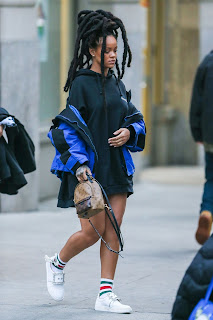 Rihanna while been featured on ELLE magazine has opens up about losing her virginity, wishes she can go back in time, to the day she lost her virginity, and change things.

The BBHMM singer, yesterday, launched the new collection of her Fenty makeup at the New York Fashion Week and on same day, revealed her latest feature for ELLE where she spoke

with the magician David Copperfield.

When the magician asked her where she would want to go to if he made her disappear and reappear anywhere in the world, Rihanna said,
“Ten minutes before I lost my virginity…and I’m holding you to that offer. LOL.”’I w
Though she has never talked about her first s*x, the singer who is fondly called Bad Gal Riri, often spoke about her experiences with the opposite s*x, and kinky things she likes to
experience during s*x.

“My first kiss was in high school, and it was the worst thing ever,” she had told Rolling Stone.
“He pretty much dumped his entire saliva glands into my mouth. It traumatized me. I didn’t kiss for, like, ever.”

I like to be spanked,” she continued.
“Being tied up is fun. I like to keep it spontaneous. Sometimes whips and chains can be overly planned—you gotta stop, get the whip from the drawer downstairs….I’d rather have him
use
his hands.”

Also, in her previous interview with Vanity Fair, she talked about what casual s*x feels like.
“I am going to do what makes me feel happy, what I feel like doing,” she said. “But that would be empty for me; that to me is a hollow move. I would wake up the next day feeling like s–t.”
When you love somebody, that’s different,” she continued.

“Even if you don’t love them per se, when you care enough about somebody and you know that they care about you, then you know they don’t disrespect you. And it’s about my own
respect for myself.